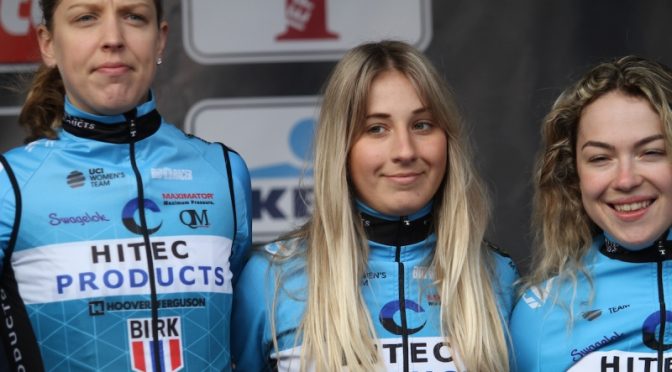 It’s a wrap. The 2019 season is done. After the world championships in Yorkshire, there weren’t a lot of races to do anymore. However, there were two and Vita Heine even got a second place in the Chrono des Nations on the 20th of October. The team then raced the Tour of Guangxi in China last Tuesday. It was the last race for Chanella Stougje, who ends her cycling career. “I just wanted to enjoy my last race.”

Just turned 23 the day after the race, Chanella is still young. But several injuries in a row force her to quit now. “I retire because I had so much bad luck in the past three years, that I’m just not able to do it anymore”, she tells. “In my first year I had the Pfeiffer’s disease and the year after I crashed hard and had to undergo surgery on both my shoulders. I still have physical problems because of that and I am not able to compete in the best way.”

Chanella thought it through and decided to end her career. “I am also a hair dresser and looking at the future, I think it is not worth the risk to continue, with a chance that my shoulder problems will become worse. There is a chance that I then can’t do my work anymore and I really like doing it. Another time surgery would have been an option, but there were risks involved and I didn’t want that anymore.”

Special place
And so, Chanella was racing the last race of her career in China. “A special place to do so. There is a chance that I might never return to this country. So that is again a nice experience and for sure the gala afterwards was a nice way to end it.” Now Chanella can focus on other things; “I won’t have a lot of free time on my hands now, as I just opened my own hairdresser’s and that goes already better than expected.”

No pressure
Even though she couldn’t ride a lot of races, Chanella liked her time at Team Hitec Products – Birk Sport. “It is a great team”, she says. “I am really happy about the way they helped me. After half a year of not racing after my surgery, they never put pressure on me. Everyone was really relaxed and I think that is really good. I hope to be back now and then, maybe in a role as a soigneur, as I really like this sport and like to help the riders.”