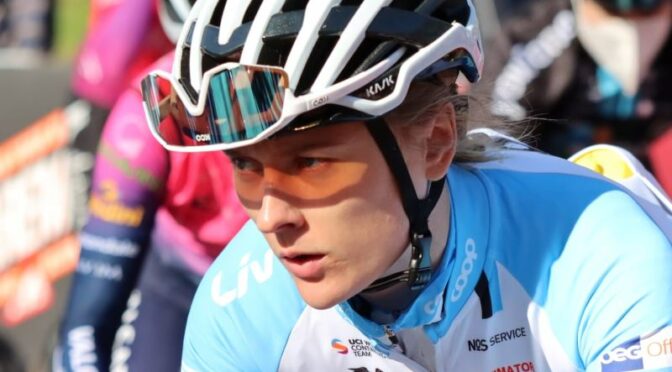 During the Easter weekend, Team Coop – Hitec Products races on two different places. On Sunday the team started in the French race Grand Prix Féminin de Chambéry. Caroline Andersson there showed herself, getting herself in a small chasing group behind eight leaders and in the end finishing in 13th position. On Monday a different group of riders will start in the Belgium race Ronde de Mouscron.

The course of the Grand Prix Féminin de Chambéry asked a lot from the riders in the peloton. Being the only World Tour team at the start, FDJ were the big favourites and in the end they got first and second with Brody Chapman and Victorie Guilman. Caroline Andersson however, did get in the mix. “It was a really challenging but fun course with a mix of both heavy climbs and technical roads”, she says about the race.

“FDJ was the strongest team today and they sat a high pace already from the start”, Caroline continues. “I managed to follow the first four laps, but in the long climb it eventually got too much and I couldn’t follow the attack. I continued to work hard to get a good result and in the end 13th was the best I could do after a very hard race.”