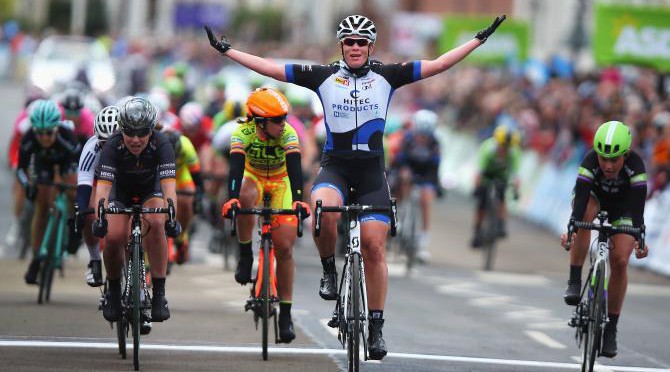 Last week our team raced the Amgen Breakaway from Heart disease Women’s Race in California which was part of the Women’s World Tour.

The four day stage race started with loop around the beautiful Lake Tahoe, a total of 117km. At the altitude of 1900hm it was obvious that several riders in the peloton struggled with the thin air. Sarah Storey (Podium Ambition) escaped as the peloton had passed the first QOM. She was of the front for 90km before she got caught as the peloton approached the final kilometers. At the top of the finishing climb Megan Guarnier (Boels Dolmans) crossed the line first for the win and the yellow jersey,

In the team time trial Cecilie was unlucky as she touched wheels and crashed. She ended up in the hospital having surgery same day on her collarbone and was taken good care of. The rest of the team finished safely. Team Twenty16 won the stage ahead of Boels Dolmans with Guarnier holding on to the leaders jersey.

Third stage was another tough stage with climbing and winding roads, to the coast and back to Santa Rosa for a three circuit finish. Marianne Vos (Rabo Liv) won the sprint in what was left of the bunch.

On the last stage, in the downtown criterium in Sacramento , it was our riders time to shine. Being short of two riders the girls had work hard to cover all the attacks. Eventually it came down to a sprint, Kirsten did what she does best and outsprinted the peloton to take the victory. A great way for the team to finish the stage race. The overall was won by Megan Guarnier after holding on to the jersey through the whole stage race.