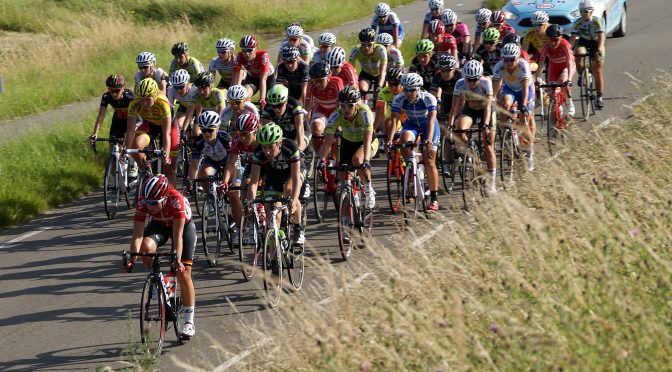 This weekend we had a small team in BeNe Ladies Tour, a three-day stage race in Belgium and Netherlands starting with a 103km stage Friday. With a course including twelve coble sections at almost 11km altogether in addition to strong winds it turned into a tough stage. Emilie, who suffered from food poisoning the days before, rode strong and was able to stay with the front group of thirty-eight riders. In the final she did a solid sprint and placed 2nd behind Jolien D’Hoore (WiggleHigh5). Thea started getting sick and had to throw in the towel to focus on getting well again.

Saturday started with a stage of 3*25km laps in Sint Laureins in the morning. The stage included cobbles and fun like the day before. A few break away attempts, but as the final approached it was altogehter. With 2km to go there was a big crash, our girls found themselves having to stop and was not able to contend in the sprint. They all finished in the peloton without injuries. Nina Kessler (Lenzworld-Zannata) won the stage.

Part two of Saturday was a flat and fast 9.6km time trial where Julie was our best in a 12th place, 46sec behind winner Jolien D’hoore. A strong ride in her first race back after being injured with a fractured hand.

Sunday the race finished with a stage of 9 laps and a total of 112km in Zelzate. A break away escaped up the road with Vera Koedooder and Ilona Hoeksma (Parkhotel Valkenburg). They stayed away for more than half the race only to be caught with 500m to go. The sprint was won by Jolien D’Hoore who also took home the GC. Emilie sprinted to 8th place on the stage and finished 11th in the GC after a strong weekend of racing from our girls.